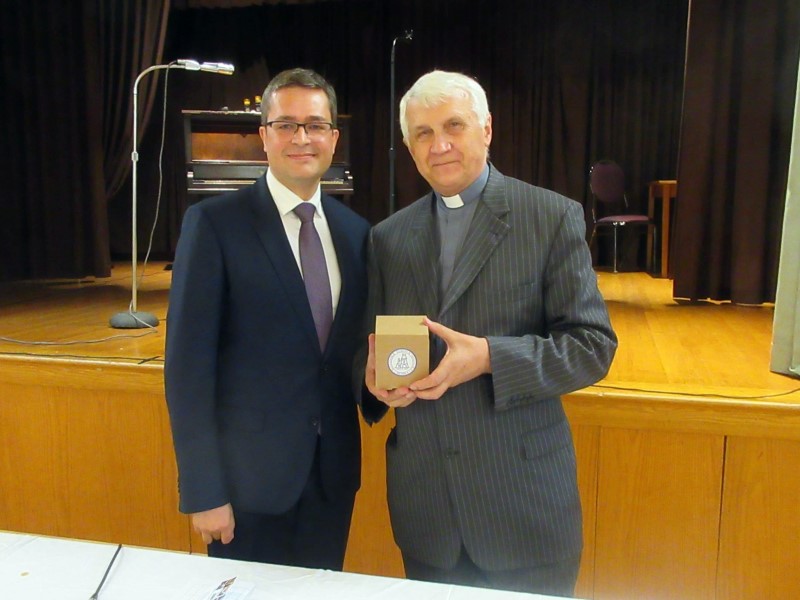 The Slovak Roman Catholic parish of Sts. Cyril and Methodius in Montréal celebrated a very significant anniversary on September 20th. Administrator of the Slovak parish, Rev. Gabriel Juruš celebrated the 50th Anniversary since he received the priest's consecration from Bishop Robert Pobožný. After twenty years it was the first priest ordination in St. Elizabeth’s Cathedral in Košice, because the communist regime, after taking over the government in 1949, permitted ordinations only in Trnava, until “Dubček's Spring” removed such restriction. But immediately after that, during the communist era of "normalization", the ordinations were again no longer allowed in Košice.

Rev. Gabriel began his pastoral priesthood in Veľký Krtíš and then worked in several parishes in the Archdiocese of Košice. In r. 1997, at the request of the Montreal Archdiocese, the Montreal Slovaks welcomed him in the parish of Sts. Cyril and Methodius, and thanks to his fluent French he then also helped in several other parishes and monasteries in Montréal.

This anniversary was celebrated by the Slovak parishioners at a luncheon where other diocesan priests were invited. Our lunch was honored by H.E. Ambassador of the Slovak Republic to Ottawa Mr. Vít Koziak with his family.

On the occasion of the aforementioned anniversary, the group Priadky performed a short cultural program “Priest, a ray of light in the darkness”, which was devoted to the role and position of the priest in today's society.

We want to thank Rev. Gabriel Juruš for his effective Parish leadership and for fulfilling all spiritual needs of our parishioners.

On behalf of the Curators
Kornélia Kozma