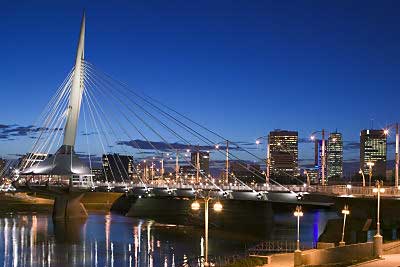 Winnipeg is an important place in the history of Canadian Slovaks, because that’s where the organized existence of the Slovak community in Canada has started.

In December 1932, Slovak League in Canada was founded in Winnipeg. It rose from the Branches of Slovak League in America that, in those times, were already established in Eastern and Western Canada. Thus a new, independent Canadian-Slovak organization was born, not because of some ungratefulness toward the American Slovaks, but from the necessity and urgent need to have an independent organization focused solely on the needs and aspirations of Slovaks in Canada.

In February 1934, Slovak League obtained its Dominion Charter, which caused the name change to Canadian Slovak League. Andrej Kučera, Juraj Rondoš and Pavol A. Sabo were its founders.

Aroud two thousand Slovaks live in the Capital of Manitoba.

The Founding CSL Branch No. 1 is still active in Winnipeg; Kris Janovcik is its President.

The community organizes a Slovak Mass four times a year, celebrated by a Polish priest who speaks Slovak.