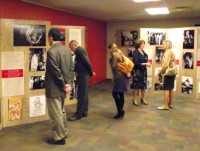 Jozef Cincik has been called a Renaissance Artist,  and Slovakia's Leonardo da Vinci. Even though his career is purely 20th century. He was a  genius without doubt. And now a display about his life and what he did is to tour Canada and the United States, since his life was closely connected to us.

The tour display outlining what he did was put together by Matica Slovenska in Slovakia. Cincik was born in an area of Austria-Hungary that today straddles the Serbia-Romania border. He died in the United States in 1992.

The display showing his works and explaining them in English and Slovak was opened at the University of Ottawa by Ambassador Milan Kollar. The Embassy co-operated with Prof. Marian Stolarik, head of the Chair of Slovak History and Culture.

What Cincik did before and after fleeing Slovakia to escape Communist domination after World War II is almost unbelievable.

Artist? Of course.. he did portraits and sketches in many mediums. He was also a cartoonist, with a biting sense of sarcastic humor. He was a stage designer, making the sets for major plays. He worked on film, including the best-known classic version of  'Janošik'. He created portraits of famous people that were printed on postage stamps, and on banknotes. He crafted stained-glass windows showing holy figures for churches and cathedrals.

The second part of the Canadian visit is at the Canadian Slovak League headquarters in Mississauga. Later, it goes to Washington. It will take any viewer a long time to read everything he did... it may even take more than one visit.

The opening in Ottawa brought out some of his connections with us. Vladimir Cincik – well known CSL member from Montreal, turned up to check the best-known member of his family. Jozef Cincik was Vladimir father's first cousin. And Prof. Stolarik showed off a collection of Jozef Cincik's papers and items that his Chair of Slovak Studies had obtained from various sources, and which are carefully archived here in Canada.

Click on any picture below to see the full size and then use the right arrow on the keyboard to advance the photos.